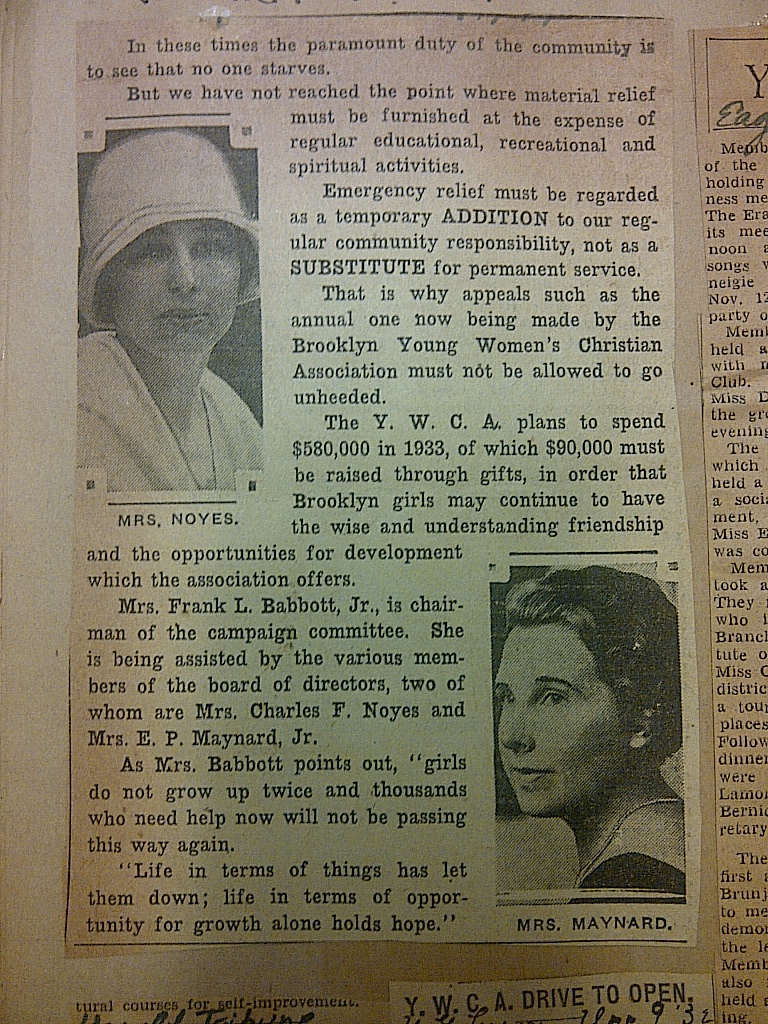 The Noyes Foundation grant allowed Brooklyn College Archives and Special Collections staff to delve into the historical records of the Brooklyn YWCA to arrange, describe, and help preserve the collection. Project Archivist Steven Calco and Brooklyn College staff sifted through over a hundred boxes of archival materials using a rough collection inventory to search for materials related to the 1920-1930s. The staff was able to locate scrapbooks, photographs, ephemera, minutes, reports, and records pertaining to the building of the Brooklyn YWCA’s new headquarters during this time period.

The most difficult aspect to processing the materials during this time period was the fragile condition of the photographs, scrapbooks, and blueprints. Many photographs were contaminated with mold and fused together.  These materials have been isolated and will be sent to an offsite vendor for treatment.  The 1920-1930s era also contains over a dozen scrapbooks with varying levels of deterioration.  Some scrapbooks are in pristine condition, while most are too fragile to handle.  The Noyes Foundation grant allowed Brooklyn College to order the supplies needed to ensure scrapbook stabilization.

The Brooklyn College Archive staff processed archival materials and records pertaining to the building of the YWCA’s new headquarters in 1927.  The construction of the new Central Branch was significant in providing low income housing for women, expanding education programs, and improving social services for the women of the borough.  The slideshow below depicts a short history of the Brooklyn YWCA’s Central Branch Building from archival materials found in the collection.

The Brooklyn YWCA records during the 1920s and 1930s also highlight the immigrant experience in Brooklyn during this time.  The International Institute was established in 1918 by the National Board War Work Council to provide assistance to foreign women whose husbands went to fight in the Great War and to help organize them for the war effort. The organization started in a small room in the YWCA’s Central Branch at Schermerhorn St. and moved to 106 Montague St a year later.  In 1928, when the building could no longer meet the growing needs of Brooklyn’s immigrant community, the Institute moved to 94 Joralemon Street and expanded its English language courses, provided citizenship help, counseling, and housing accommodations for eighteen residents. 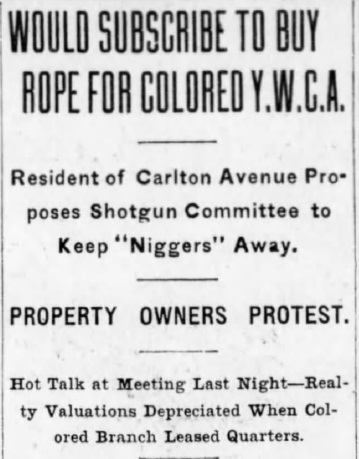 amidst hostile race relations within the community.  The YWCA leased property on 280 Carlton Ave in an attempt to create an African American branch to provide much needed services for young African American women.  White residents in the community opposed the establishment of a ‘colored’ branch in their neighborhood arguing the organization “acted without consideration for the white residents in the section” (Brooklyn Eagle, 1903) when leasing the property.  Furthermore, property owners claimed that the land would be devalued with a new influx of minority populations.  Local newspaper clippings show the vehement backlash against the establishment of the institution at town meetings where residents called for “shotgun” committees and spoke of lynch mob tactics to keep African Americans out of the neighborhood.

The failed attempt at Carlton Ave led to the creation of the Lexington Ave Branch with the help of Reverend A.J. Henry, M.C. Brooks, Dr. Hunter, and Mrs. Mary Stores Haynes.  Early minutes show the problems with housing discrimination and hostile real estate agents. The YWCA petitioned every week to acquire the 300 names needed to set up an African American branch in Brooklyn and successfully acquired a lease on the property at 112 Lexington Ave.

African American women in front of the Ashland Branch YWCA.

To meet with the greater demands of the public, the Ashland Branch was established in February 2, 1919 with housing for 22 women, a library, gymnasium, cafeteria, and various club rooms.  The Ashland Branch provided Bible study, English classes, sewing and embroidery classes, religious meetings, social events, and an employment agency that served thousands of African American women a year.

The Brooklyn YWCA integrated its programs and services in 1943 turning the branch exclusively into a residential building.  The organization did not fully integrate housing until 1950 when the branch was sold to the Shafrose Realty Corporation.