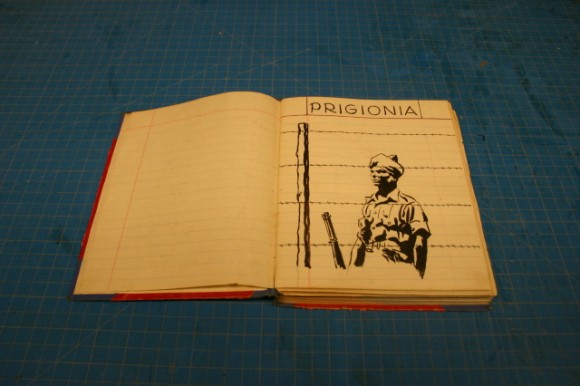 The purchase of this diary was made possible by Mrs. Frances A. Hess who has endowed a fund to care for and enhance the collection of her late husband Dr. Robert L. Hess.

Prigionia (Imprisonment) contains the diaries and notes of Vincenzo Marini, an Italian Cavalry Captain who was a prisoner of war during World War II.  Vincenzo Marini was captured in East Africa in 1941 and remained a POW until 1944. The collection is composed of a notebook and 23 loose pages. The notebook contains the description of the surrender of the Italian forces, their imprisonment and transport as well as drawn maps showing Marini’s transport from Africa to India to America and finally back to Italy. The loose pages contain diaries written during imprisonment in India and lists of officers. Conservator Slava Polishchuk constructed a protective box for the collection. 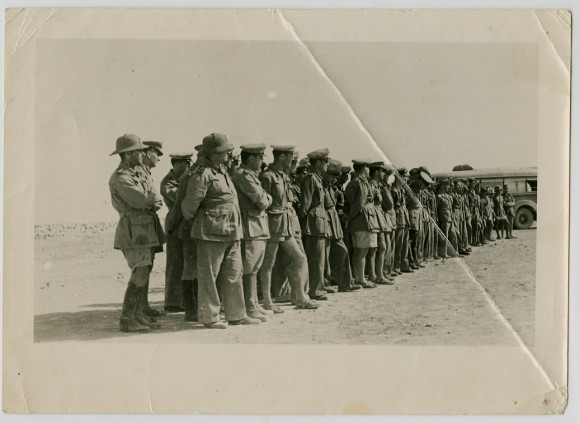 Photograph of Italian soldiers at Gambut Airport, Marmarica, Libya (28 October 1940). This photo was found inside of Marini’s diary.

In East Africa, Marini served as Liaison Officer to General Gazzera. The war was not going well for the Italians in 1941 as city after city was falling to the British and Ethiopian rebels. On April 6, the Allies took the capital of Ethiopia, Addis Ababa. Gazzera’s forces in southern Ethiopia were forced to flee their stronghold of Jimma and try to organize a mobile defense. However, due constant British bombing and lack of supplies, the Italian forces were forced to surrender to pursuing Free Belgian forces. The terms of the surrender (in French) were copied by Marini in his diaries. 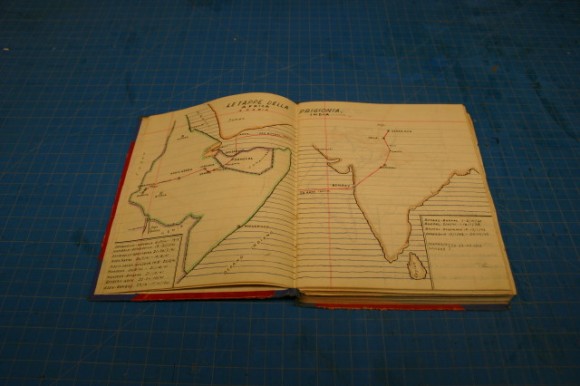 By the end of 1941, the British had captured hundreds of thousands of Italian servicemen in both North and East Africa. Many were sent throughout the Empire to the India, Australia, South Africa and the United Kingdom itself. Marini was sent first to India, where he was moved from camp to camp. Many soldiers did manual (especially agricultural) labor for the Allies during the war. Officers, such as Marini, were kept separately. After the United States joined the war, Britain asked that America take in some captured Germans and Italians, as there were too many for the British to handle. A couple thousand Italians, including Marini, were sent to US before Italy surrendered to the Allies in 1943 and became a co-belligerent against Germany. Slowly, Italian POWs were transported back to Italy. Marini himself arrived in Naples on February 6, 1944.

Related materials at the Hess Collection

5 thoughts on “Prigionia – Diaries of an Italian POW”