Beatrice Siegel graduated from Brooklyn College in 1932, before pursuing a master’s degree at Cornell University. In 1972, she published her first book, Indians of the Woodland: Before and after the Pilgrims, which preceded the other sixteen she would publish until 1998. All of these books were crafted for young readers of various age groups, and the materials related to them are part of the Beatrice Siegel Collection (accession number 93-003) at the Brooklyn College Archives and Special Collections.

Siegel wrote biographies of several women, from the president of the Philippines to a Cuban ballerina. Through her choices, it is possible to perceive her admiration for women that took leadership roles and defied what society expected from them. Some of them are: Corazon (Cory) Aquino, former president of the Philippines; Alicia Alonso, acclaimed Cuban ballerina; Lillian Wald, who established the Henry Street Settlement House in New York City; Margaret Bourke-White, a famous photographer, and Florence Nightingale, a British woman known for her pioneering work as a nurse in the 19th century. 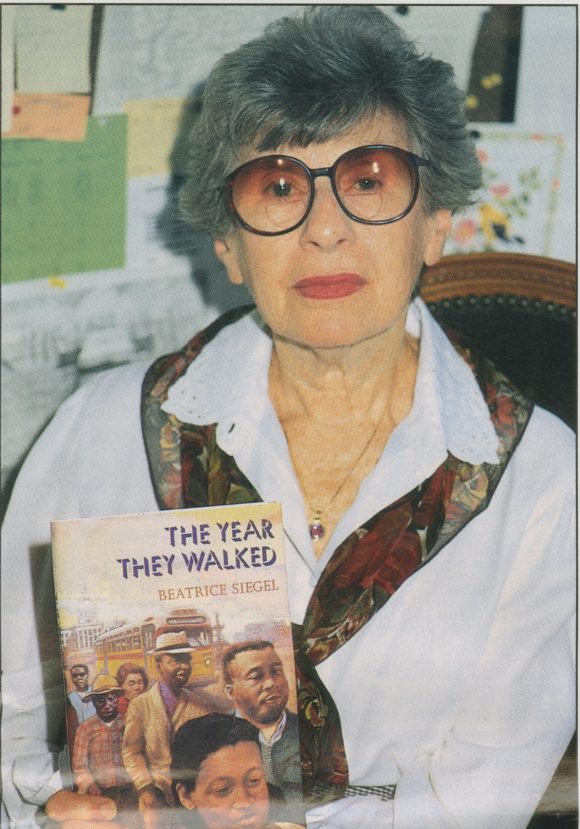 Beatrice Siegel holding one of her books (1996)

Beatrice Siegel was also concerned with minorities and social justice in general. She wrote about important events in the civil rights movement, such as the story of Viola Liuzzo, murdered by members of the Ku Klux Klan in Alabama, and the story of Rosa Parks and the Montgomery bus boycott (pictured on the left). Additionally, Siegel has multiple books related to Native Americans.

In her collection, the writer left evidence of the meticulous researcher she was. Without the aid of the internet, she would write letters to several libraries, archives, museums, and people she deemed important for her topic of study, to request information and materials.

As mentioned above, one of her biographies was of Alicia Alonso. In her professional life, the ballerina dealt with serious issues surrounding her vision, experiencing even blindness while still dancing. She underwent several eye surgeries. Siegel probably felt that if she could have access to the ballerina’s medical records, she would understand better the nature of her eye problems in order to portray it correctly on her book. Alonso allowed Siegel to request her medical records from the New York Presbyterian Hospital. Unfortunately, following their retention schedule, the hospital destroyed her records before Siegel could have them. That did not stop her from writing a successful biography that had the approval of the ballerina herself. 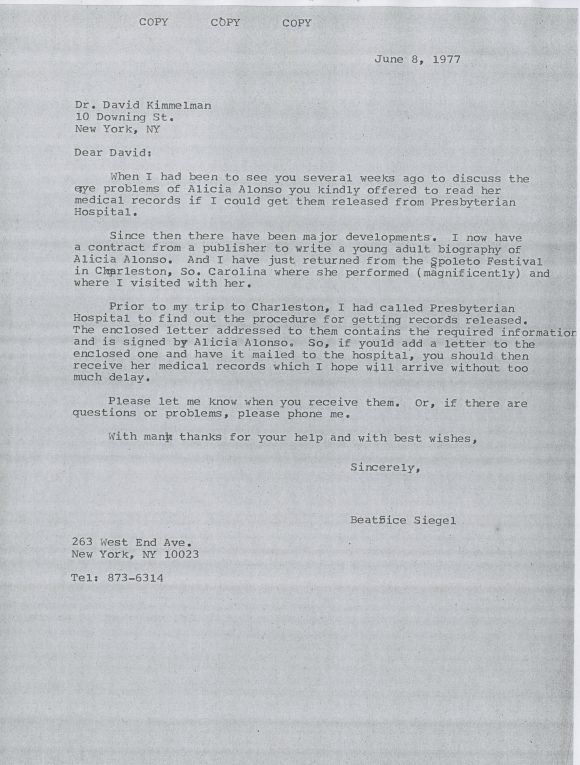 Letter to Dr. David Kimmelman, explaining that she has the authorization from Alonso to search for her medical records. 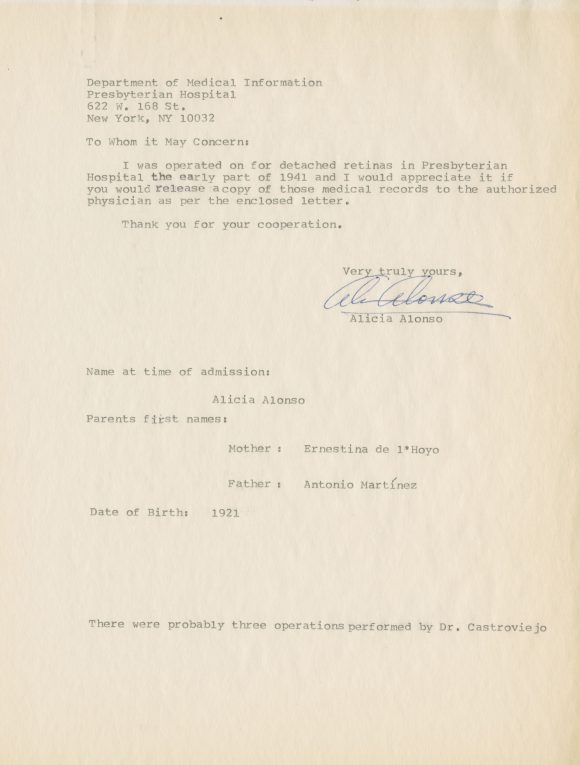 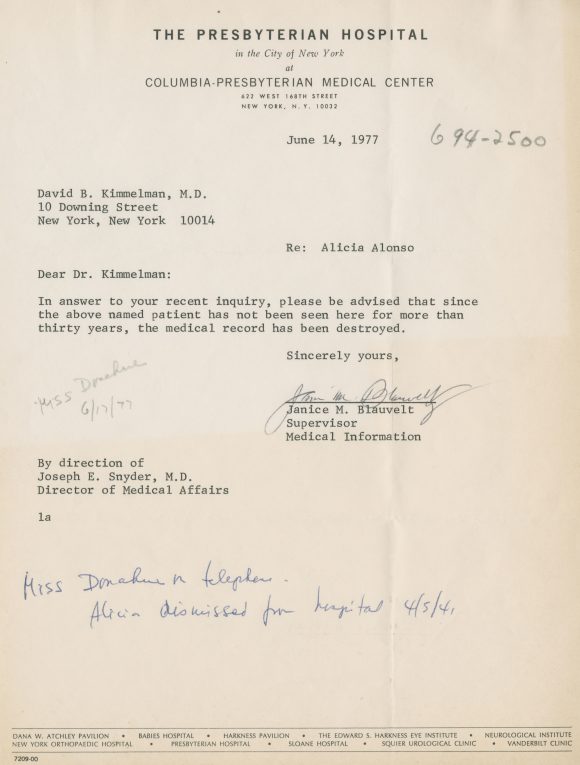 Answer from the Presbyterian Hospital stating that, following their policy, Alicia Alonso’s records had been destroyed.

Beatrice Siegel attempted to perfectly picture the scenario surrounding the main characters of her biographies. Lillian Wald, the nurse who found the Henry Street Settlement, had a particular devotion to flowers. In possession of this knowledge, Siegel researched the flowers that were common in the area where Wald grew up. Such detailed investigation strengthened her biographies and historical books.

In conjunction with other research questions, notable effort was put into exploring Wald’s genealogy. In this collection, there is correspondence from the author reaching out to Wald’s family members and friends in search of photographs and information about Lillian Wald’s family. Important notes equivalent to those were taken and carefully organized in index cards. The image below demonstrates Siegel’s notes on the genealogy of Lillian Wald. 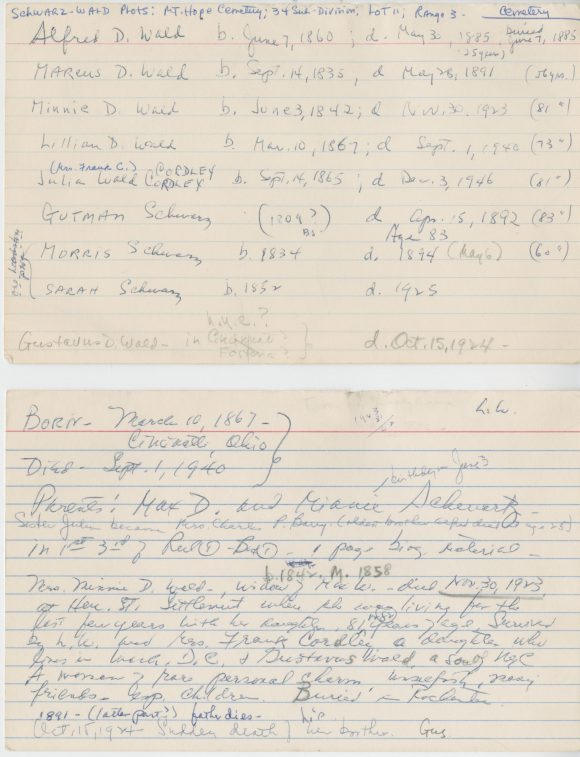 She also compiled bibliographies to keep track of the sources she researched and read. These bibliographies were assembled in small index cards to differentiate the notes (pictured above, significantly larger) from the bibliography. 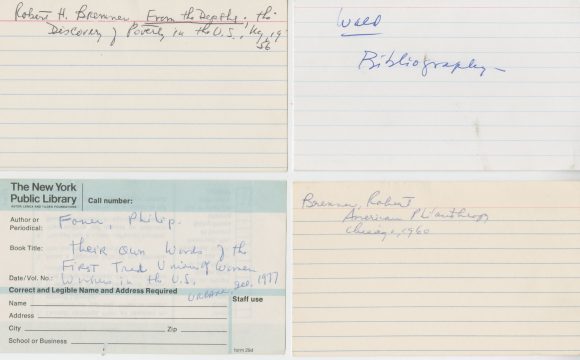 Sample of the bibliography compiled by Beatrice Siegel on Lillian Wald

Beatrice Siegel certainly understood the responsibility of authentically illustrating people and events in her biographies and historical books. Her collection demonstrates how a well-written book is the result of a strong and comprehensive research.

All of the pictures used in this page are part of the Beatrice Siegel Collection (#93-003).