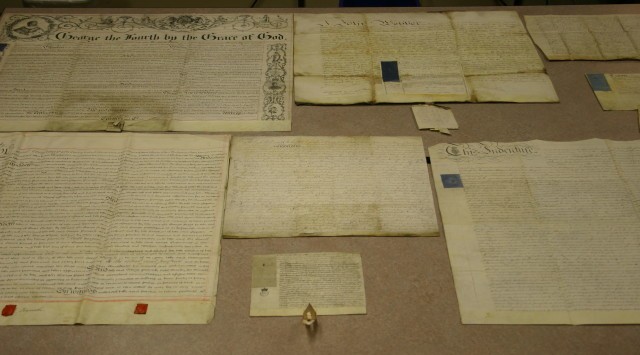 The Papers of Judge R. Bartels Jr. (Accession # 2000-002) contain a collection of historical English legal documents, including indentures, wills, death certificates, a court order and a militia roster. The time span of the documents is from 1620 to 1872 and largely comes from the south of England. The documents of the collection are written on vellum. Many parchments have the wax seals or attached resin seals. Most also bear tax stamps similar to those whose use the British Parliament tried to enforce in the colonies (including the future United States) in 1765.

Indentures were legal contracts in medieval and early modern Europe where two copies of the agreement would be copied on one piece of paper. The paper would then be elaborately cut in two so that the cut ends would match. Most of the indentures in the Papers of Judge R. Bartels Jr. are land or property leases. However, there are also two indentures that serve to divide property between families after a wedding and an indenture that deals with debt obligations.

The Papers of Judge R. Bartels Jr. have several wills, including the will of John Webber, an English artist who accompanied James Cook on his third Polynesian Expedition. Many of the wills contain notes of their extraction upon the death of their writer. This collection also contains several death certificates, sometimes attached to wills. Until the early 19th century, deaths in England were not recorded in an organized manner. The Church of England, however, recorded the deaths of Anglicans at the parish level and tried to get in contact with the executors of the will of the deceased.

The collection also contains an official copy of a court order of the Bench of Westminster, presided by Sir Robert Dallas, a famous jurist and opponent of Edmund Burke. The case deals with a land dispute. There is also a militia roster for the Forest District of Berkshire County from 1796-7 (during the War of the First Coalition). Many of the men listed are substitutes. Many are also illiterate and instead of a signature they signed with an X.