The Brooklyn College Library opened in the fall of 1937 on the college’s newly constructed Midwood Campus. Situated in the center of the east quadrangle, the library and its magnificent clock tower became the signature building of architect Randolph Evans’ Georgian style campus and a landmark for the surrounding community.

The following video, composed of photographs from our Archives, documents the construction of the library from December 1935 to September 1937.

The Library and Fiorello LaGuardia

New York City Mayor Fiorello LaGuardia was instrumental in securing the construction funds from the Work Progress Administration. He took part in the ceremonial groundbreaking of the campus in 1935. In his heartfelt remarks given at the 1939 inauguration of Harry Gideonse as the college’s second president, he summed up his philosophy on public higher education: “At one time a college education was a sort of privilege. We are living in a time in which advanced education is the responsibility of a government, and every boy and girl who can absorb it ought to be entitled to it.” 1

The library was named LaGuardia Hall in his honor on October 20, 1947 in recognition of his personal connection and many contributions to the college.

By the 1950s, the Library’s collection had reached the building’s capacity.  Designed to hold a maximum of 90,000 volumes, the shelves were packed with more than 200,000 books. An extension was first proposed in 1945, but construction did not begin until 1957.

When it opened in the fall of 1959, the modern glass and metal framed extension was hailed by Chief Librarian H.G. Bousefield as a  “clearinghouse rather than a storehouse for more effective education of students, including self-education.” 2  For the first time students and faculty could browse the book collection which was previously stored in closed stacks.The extension’s open floor plan allowed for more study space and lounge areas.   In a publicity pamphlet from the 1960s, the library with its new extension was referred to as “the happiest building on the campus.” 3   It was also one of the busiest.

On May 25, 1983, Brooklyn College President Robert L. Hess dedicated the extension to Harry D. Gideonse, the longest serving president from 1939-1966. A scholar and prolific writer, Gideonse was the guiding force behind the college’s growth and academic success. 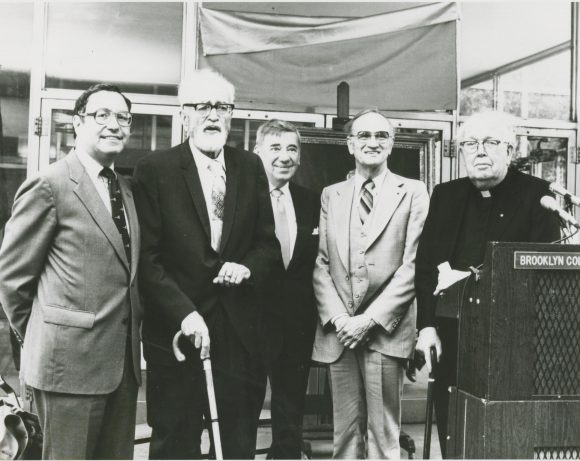 BC Presidents past and present at the dedication ceremony for the Harry D. Gideonse Library. Left to Right: Robert Hess, Harry Gideonse, George Peck, John Kneller, and Francis Kilcoyne.

At the ceremony, President Gideonse remarked: “My priorities – freedom and responsibility, the role of education in a democracy, the liberal arts, and international relations and economics – always stood informed by the record of those who had thought before and recorded those thoughts in books.” 4

By the 1990s, the library’s shelves were once again filled to capacity.  Its space was inadequate for the growing student population. It’s technology was antiquated, and the building was continually plagued by floods and mold. Plans were drawn up and money secured to completely renovate the existing library and add another new wing.

This total overhaul was completed in 2002.  The Brooklyn College Library now contains more than 1.4 million books on 21.5 miles of shelving and 6.5 acres of floor space.  It has seating for more than 2,300 users, multiple classrooms and group study rooms, hundreds of public computers and the state-of-the-art Woody Tanger Auditorium. The college’s IT department is also housed within the library, making the building the campus’s technological hub.

In describing the Brooklyn College Library, Barbra Buckner Higginbotham, the Chief Librarian from 1985-2007, stated: “The Library transcends the experience of each individual classroom, to become that place where all members of the academy intersect and interact. It is the heart of the academy.” 5 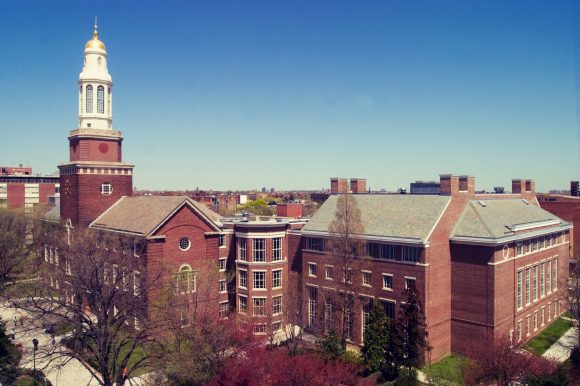 The expanded and renovated Library opened in 2002. Pictured here: LaGuardia Hall and the new wing.